Struggles and Strategies for Survival Beyond the Walls of Jail 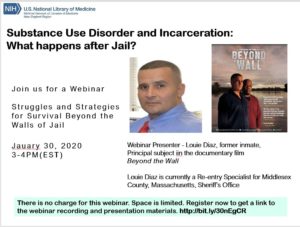 Louie Diaz is a substance use disorder counselor and re-entry specialist with the Middlesex County Sheriff’s Office. In his youth, Louie sold drugs and stolen jewelry and was part of a crime theft ring. During his struggles with addiction, he received a 10-year prison sentence for stabbing a police officer while trying to flee a crime scene. It was during his last sentence that he made a commitment to change his life and developed a passion for helping other returning citizens. As a counselor and re-entry specialist, Louie now tends to the emotional and physical needs of others. Louie knows drugs and crime from both a criminal and a treatment perspective.

“No re-entry program is going to go under the bridges and into the tent cities of the homeless looking for the guys who come out of jail and fall between the cracks. But if you are not willing to go to their places, they will end up back in jail.’

In this webinar Louie will share his own story of substance use disorder and incarceration as well as the work he is doing in the cities of Lowell and Lawrence, Massachusetts to address the addiction crisis. He will discuss what it was like to be followed by a film crew for 5 years as this documentary was being made. He will also share why this film is important as we begin to treat substance use disorder as a public health issue instead of a law enforcement issue.

The NLM Resources related to substance use disorder that are highlighted during the webinar are MedlinePlus, Opiate Addiction and Treatment Portal, and the Graphic Medicine Book Club. Also, an extensive substance use disorder resource list that includes materials from NLM and partner organizations will also be made available with the recording link and webinar slides.

Learning Objectives:
• Understand the barriers individuals face when returning to the community after incarceration and how those barriers might affect the success of their transition back into society.
• Learn what “recidivism” is, and why 95% of people return to drugs and alcohol after release from prison and how substance use disorder relates to recidivism.
• In the film, Billy Cabrera says, “We get a handbook on how to conduct ourselves in prison, when you get released you don’t get a handbook on how to live life.” Learn what jails and prisons are doing to prepare individuals for re-entry into the community.